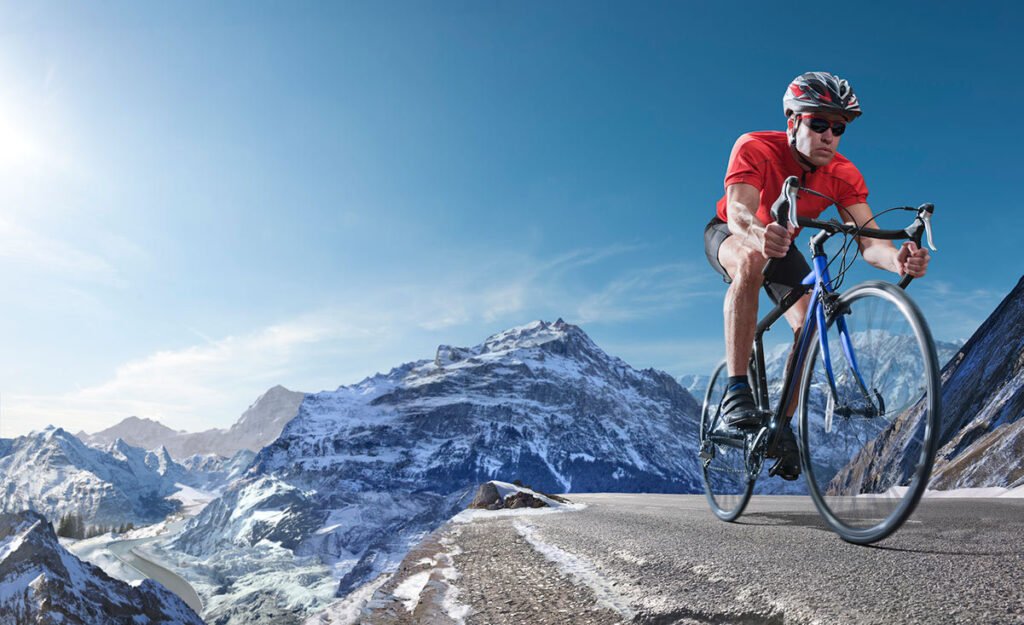 The Blue Ridge Parkway is famous for its spectacular views, handcrafted stone features, vibrant history, and, of course, cycling. The Tour de France route varies, but always boasts some of the most difficult and scenic routes in the world, with visitors traveling near and far to watch cycling legends pedal nearly the entire country. While the Parkway is used for recreation and Tour routes are used for racing, it’s interesting to compare our most popular Parkway climbs with some of the Tour’s most infamous mountain routes. Let’s jump in.

The Blue Ridge Parkway covers 469 miles of road between Virginia and North Carolina. The Parkway traverses the southern and central Appalachian Mountains, including parts of the Great Smoky Mountains and the Shenandoah Mountains, which are some of the world’s oldest peaks. Cyclists typically complete the Parkway in 5 to 10 days, with the fastest time recorded at 29 hours and 36 minutes.

This user-created map of the Blue Ridge Parkway features important stops and points of interest along the way.

Unlike the Parkway, the Tour de France route changes every year. The 2020 Tour covered 2,156 miles of the country, with the winner finishing in 87 hours and 20 minutes. Some aspects of the Tour remain consistent; for instance, the route always includes the massive Pyrenees Alps mountain ranges, with climbs like Alpe d’Huez, Mont Ventoux, Col du Galibier, and Col du Tourmalet gaining legendary status (and hundreds of thousands of spectators). 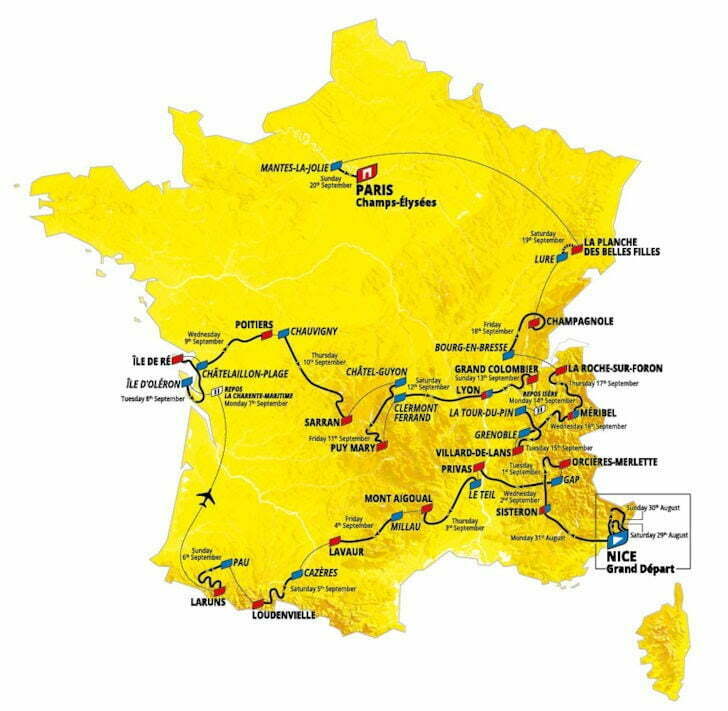 The 2020 Tour started in the city of Nice and ended in Paris’ Champs-Élysées, as it has since 1975. Check out this interactive map for more route details.

The Blue Ridge Parkway varies greatly in elevation, with its lowest point at the James River measuring 670 feet and its highest point at Mt. Mitchell reaching just over 6,000 feet. Either direction you ride it, you’ll gain roughly 48,600 total feet in elevation.

The highest climb is the Mt. Mitchell section of the Parkway. Measuring 24.1 miles with over 5,100 vertical feet of elevation gain, this section has earned the title of one of the 30 hardest hill climbs in the world by Bicycling Magazine.

The longest single climb is in Virginia, where the Parkway climbs from 670 feet to 3,950 feet for a total elevation gain of 3,300 feet in a mere 13 miles.

The steepest climb is Waterrock Knob in North Carolina, which covers 2,500 vertical feet in 5 miles, topping out at 5,820 feet.

In contrast, the highest climb ever reached in the Tour de France topped out at 9,193 feet on the Cime de la Bonette loop road in the Maritime Alps. Much of the higher elevations reached in the Tour are in the Alps, like Mont Ventoux, which is one of the Tour’s most iconic climbs. Mont Ventoux traverses 13.4 miles to its 6,263-foot summit for an elevation gain of 5,000 vertical feet.

At 8,668 feet, Col du Galibier is the eighth-highest paved road in the world and frequently one of the highest peaks in the Tour de France. This climb stretches 21.9 miles and has an elevation gain of roughly 6,300 vertical feet.

Col du Tourmalet in the French Pyrenees is the most-climbed pass in the history of the Tour. With a base elevation of 2,312 feet and a peak elevation of just under 7,000 feet, riders amass about 4,600 vertical feet in 11.7 miles.

The Parkway isn’t as steep as many other mountainous highways, with its grade generally maxing out at 6 to 8%. But just because the Parkway’s grade is moderate doesn’t mean its climbs are easy; in its Asheville section, Mt. Mitchell maintains a 4% grade for over 24 miles, while Mt. Pisgah sustains a 3.7% average grade for over 13 miles.

In contrast, the average grade for many of the Tour’s most difficult climbs is between 7 to 8%, with the steepest, Mont Ventoux, maxing out at 12% and covering 13.3 miles. Most of the Tour’s hardest climbs, like Col de la Loze, Col du Galibier, and Mont Ventoux, average about 12 miles with a 6 to 8% grade.

Because the Blue Ridge Parkway uses short side roads to connect to other highways, there are no direct highway interchanges along the route, meaning no cross-traffic. Still, the Parkway was primarily built for motor travel (it’s called “America’s Favorite Drive” for a reason), and its narrow roads don’t have bike lanes. Cyclists should exercise extreme caution when riding on the Parkway by wearing reflectors, helmets, and high-visibility clothing, and staying off the road during periods of low visibility. The most-traveled time period on the Parkway is from mid-May to mid-September, so if you’re planning a cycling trip, you may want to hit the Parkway in early spring or late fall.

During the Tour, it’s typical for roads to close to vehicles a few hours before riders are scheduled to pass through a specific section. If you’re cycling an old Tour route, expect vehicle traffic to fluctuate depending on whether you’re traveling through an urban area or a remote part of the countryside. The most popular time to visit France is in the summer, therefore we recommend planning your cycling trip in spring or fall.

Want to experience the excitement of the Tour this year? Join other riders & non-riders from around the world this July for our annual guided Tour de France spectator tour.

The Blue Ridge Parkway is highly regarded for its 200+ scenic overlooks that provide cyclists with sweeping views of the aptly-named Blue Ridge Mountains. Many overlooks have picnic tables, trails, or other amenities to enjoy along your ride. The Parkway also butts up against some larger urban areas including Asheville, Charlottesville, and Roanoke, providing plenty of opportunities to explore these cities.

When cycling the Parkway, be prepared to ride for long stretches between developed areas. In its entire 469 miles, there are only 4 lodges with restaurants located on the Parkway. These offer a nice reprieve from sleeping on the ground and eating Ramen, but they are too far apart to rely on as a sole source of shelter and food. Therefore, we recommend you pack plenty of food and water, and plan on roughing it at the numerous campgrounds along the road. If you have time to detour into a town or head to a lodge, that’s great—but having everything you need to go it alone will provide peace of mind and allow you to ride at your own pace.

Tour de France cyclists compete against the backdrop of some of the loveliest scenery in France. While the Tour’s route changes each year, the route always passes through the mountain chains of the Pyrenees and the Alps and finishes on the Champs-Élysées in Paris. Cycle any of the Tour’s past routes and you’re bound to enjoy idyllic views of France’s countryside, coast, and rugged mountain ranges. As an added bonus, you’ll have the chance to see cobblestone streets and Gothic architecture in some of the country’s most historic towns, like Amiens Métropole, featured in the 2018 route, and Privas, featured in the 2020 route.

For the athletes who compete in the Tour de France, there is no stopping to enjoy French cuisine along the way. For the rest of us, however, following a past Tour route will offer plenty of opportunities to enjoy the country’s authentic food and culture. 2020’s Tour started in the city of Nice, which is a large coastal city known for its Baroque architecture and delicious food. While along the coast, make sure to try some fresh oysters, which thrive in the Baie du Mont St-Michel, and enjoy hand-pressed cider and homemade baguettes while riding through the countryside.

But despite the draw of delicious new cuisine, you should still plan on packing your own food and water, as cycling the length of a country will undoubtedly keep your metabolism up—even if you are stopping for pain au chocolat every chance you get. It’s also common for businesses in smaller villages to close as early as 1pm.

Planning an Asheville cycling trip? Let us do the heavy lifting

What’s the best part of planning a cycling trip? Trick question—it’s not the planning. Our comprehensive DIY bike tour package includes hundreds of miles of rider-approved GPS cycling routes around Asheville (including the Parkway), tips on where to eat and drink, our favorite outfitters, and so much more. Our tour packet also includes world-class riding on less-traveled roads off the Parkway. Contact us today to learn how you can enjoy all the perks of a self-guided bike tour without the hassle of planning. Plus, stay tuned for our Provence bike tour, coming soon!